Some time ago I discovered the easy of use of Python and I fell in love with it : itñ(TM)s a very productive language, easy to understand, multiplatform, multipurpose and with a lot of documentation and  free code around to use and learn from.

Later, I discovered Django and felt more or less confortable with it. Then, about a year ago I found web2py and I fell in love again for exactly the same reasons I like Python. web2py is to web frameworks what Python is to languages: easy to read, multipurpose, jQuery integration, with free documentation, coding and checking the results of your code without leaving the web browser, lots of examples and free code to learnÁ much easier to understand than Django and (from not my only personal point of view) much more productive.

For some time, Iñ(TM)ve been using web2py starting it right from its sources. Now Iñ(TM)ve finished packaging it for Debian, so Debian and any of its derivatives (as Knoppix, Ubuntu, LinEx, etc.) can install it as a package.

Iñ(TM)ve just uploaded the packages and sources to the New Debian queue where they still have to pass the check of the ftpmasters to be (or not) accepted in the Debian repository. In the meantime, the packages are available at:

http://people.debian.org/~jredrejo/web2py/lenny/ for old releases with Python 2.5 as default python version.
http://people.debian.org/~jredrejo/web2py/squeeze/ for new releases with Python 2.6 or 2.7
Two packages are created:
After installed, if a desktop environment (like KDE or Gnome) is used, web2py can be run from the menu Applications->Programming
This will launch a gui to start the server, and the applications will be stored in $HOME/web2py
If web2py is launched from a terminal, the application will be stored in the directory where itñ(TM)s launched from (whenever write permissions are allowed, if not it will be done again at $HOME/web2py)
A README.Debian is also installed at /usr/share/doc/web2py-gluon/ with more details on running or installing web2py applications in Debian based distributions, including documentation and an example configuration file to use Apache instead of the built-in server.
You can watch and enjoy some of the web2py features at http://www.web2py.com/examples/default/videos . As an example, if youñ(TM)re a lazy programmer, take a look at http://www.vimeo.com/16048970 to know how to build a web site with authentication, databases, logging, different layouts, etc. in less than 8 minutes 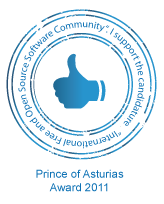 .
.
Off topic: I urge you all to read http://www.cenatic.es/swlppa/en and support personally or as a collective the Free and Open Source Software Community as a candidate for the Prince of Asturias Awards 2011 in the International Cooperation category
.
Etiquetado con: Debian, Python, Web2py